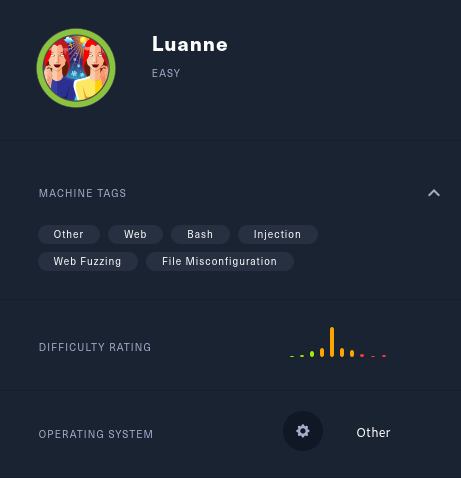 Luanne is categorized as an easy box.
It begins with a lot of enumeration, two webserver and a fishy hidden service.
We leverage the hidden service into RCE in order to get a shell on the system.
We then enumerate and notice another version of the previously exploited service running.
That version of the service is launched using weird options it grants us access to a conveniently placed ssh key, using this key gets us user.
Afterwards, we decrypt an old backup version of the service and find credentials in a config file, these work for the root user.

THE Os seems to be NetBSD.

NetBSD is a free, fast, secure, and highly portable Unix-like Open Source operating system. It is available for a wide range of platforms, from large-scale servers and powerful desktop systems to handheld and embedded devices.

I Enumerated the high port (9001) extensively without finding anything, I just assumed this would be my target since the webserver name is odd (Medusa/1.12).

It was not kind to me as every single request I tried was blocked behind a basic auth and my efforts to brute force it went nowhere.

I then proceeded to enumerate the lower port and ran nikto on it.
It instantly pointed out that there is a readable robots.txt.

Fetching /weather returns me a 404, at last. Something is not giving me 401 ! Running ffuf on it, I found another folder in there named forecast.

Exploiting FaaS (Forecast as a Service)⌗

On this page we see that this is some kind of API trying to forecast weather for a given number of cities. I proceeded to try the “city” argument and sent that request to my repeater.

I then tried fuzzing the parameters to see what breaks.
I didn’t have to search far as the single quote instantly gave me huge results:

We now know that this service is a lua script, which means that most likely RCE is achievable, let’s get crafting.

After reading a bit about the lua language, i know these things:

We get RCE, let’s get a reverse shell !!
We can reasonably assume that an OpenBsd nc payload should work since NetBsd is a fork from the bsd family and most likely has the same binaries as its predecessors.

I should crack this hash that I found in .htpasswd:

After an hour enumerating, I have found the vector of attack.
After running the command to list processes in bsd systems:

I found that there is a another version of the vulnerable service on port 3001 instead of port 3000.
It is started using /usr/libexec/httpd.
https://man.netbsd.org/NetBSD-6.0.1/httpd.8
It is running as r.michaels and it seems to be given /home as “slashdir”, I still need to see how this affects my requests.
But I suspect that I will be able to get files from /home/r.michaels given the process' permissions.

Okay so, after a long time carefully reading on bozohttpd’s man pages, I found out that using “~”" will send you to the public_html directory for the webserver.
In our case it is located in /home/public_html most likely, given the man page.
This is what I came up with to test the theory:

I started enumerating using that formula, I know it is redirecting me to a directory since it gives us “Document Moved” instead of 404:

I then tried a bunch of files I thought could be in there.

And with that we struck gold, we got an openssh private key.

Using this I can login as r.michaels.
I must say the placement of this key feels a tiny bit unrealistically bad and I kind of dislike that.
But let’s move on.

Early on in my search, I stumbled on a file called devel-backups-timestamp.tar.gz.enc.
The .enc extension is normally used by files encrypted using openssl.
So I tried decrypting it with a bunch of passwords we found:

It just wasn’t working.
After reading on NetBsd a bit, I found the netpgp utility.
It is a BSD version of the OpenPGP SDK.
It can decrypt the encrypted file using the private ssh key that we used to connect as the user.

Using this gave me the .tar.gz, after unarchiving it I found another development version of the weather api.
Looking through the files I found the .htpasswd for this version.

I used john the ripper in order to crack the found hash.

This gave me the password which is “littlebear”.
The password worked for the root user of this machine !

This box overall was fun, i really enjoyed the foothold.
I like the user but i would have liked it better if the files we found made more sense than an ssh key placed in a public_html directory.
The root one taught me alot and was interesting but very OS specific.